One of the two most expensive laptops we decided to review is none other than the Acer Nitro 5 gaming laptop. It is part of Acer’s new “Nitro” line of models and is the mid-tier one which in our opinion is the best value for your money compared to the rest. It features some respectable characteristics even for a gaming product and is heavily geared toward gaming itself, making it a very appealing addition to anyone’s gaming dream set up.

The Acer Nitro 5 has one of the best processor chips inside of it in the face of the i5-7300HQ, as well as a Titan series video card, making it an unstoppable force when it comes to handling heavy games. It still won’t be able to run the most demanding titles on “Ultra” settings but this is as close as it gets in this price bracket.

Head over to our best gaming laptops Buyer’s Guide to find out other laptop models that might be more fitting to your budget.

One of the things that makes this laptop stand out a lot is that it really is geared towards gaming. It has a rigid construction, red accent elements, special cooling system, and most importantly – hardware parts that can take your gaming to the next level.

It comes with a Windows 10 64-bit Home Edition which is always a great thing, as most laptops come without an OS and that bulks up their final price. Let’s start with the processor inside, as it is one of the most important elements of the Acer Nitro 5.

Inside this laptop you will find an intel core HQ processor from the 7th Gen (Kaby Lake) in the face of an i5. It is a quad–core CPU with 6MB cache that can work at up to 3.5GHz when in boost mode.

That, combined with the RAM and Video card characteristics is space-ship worthy and is something only the higher-end laptops have.

It might also be one of the few reasons (apart from the Titan series video card) that this laptop costs as much as it does. If it had a smaller intel core CPU it would’ve been in a completely different price bracket.

If you are looking for something with more computing power and, perhaps, a stronger 4-core CPU with a bigger cache, we suggest checking out our ASUS FX53VD Review.

You get 8GB of the fastest DDR4 RAM memory inside separated into two 4GB slots. That seems to be the industry standard for most laptops nowadays, varying in only DDR type and working frequency.

This memory works at 2666MHz and is one of the fastest available on the market right now, with exceptions such as the two and three thousand dollars laptops.

The hero of the day here is the GTX 1050 Titan series. It isn’t a normal Nvidia GeForce GTX 1050 graphics card, as it has twice as more video memory than normal GTX 1050s. It has the whopping 4GBs GDDR5 VRAM making it ideal for running games like PUBG at 60+ FPS. There is also an AMD Radeon version which is cheaper but isn’t quite on the same performance level as the Nvidia GPU.

In terms of storage, things are pretty modest here, as you are getting a 256GB SSD – something standard for a budget gaming laptop. That is enough for you to put your OS on it as well as a few big games such as GTA V. SSDs are far better than HDDs in terms of loading and saving speeds in-game, so always try to aim for a laptop with an SSD (or SSD/HDD combo).

The panel here is a 15.6 inch Full HD (1920×1080) widescreen LED-backlit IPS display with very sharp images and good contrast. It is also very bright adding to the outdoors gaming experience. Unfortunately, the battery life won’t last you long if you are playing somewhere relying solely on battery power. On average use, it lasts around 4 hours. 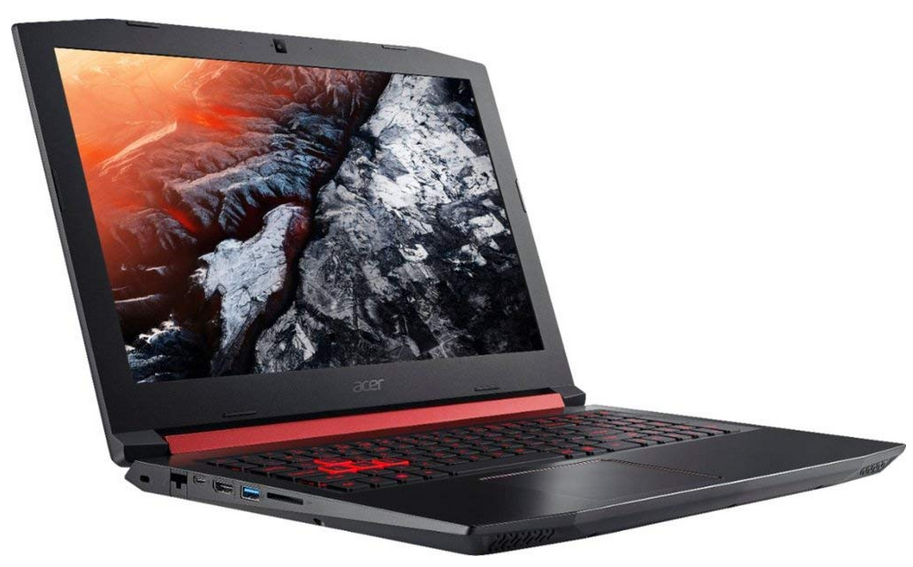 The build quality is great, as we already mentioned. Everything feels premium and there is little to no flex both to the body and the screen itself. The handrest has this sort of brushed aluminium feeling to it.

It tends to get a little hot, especially when you push it too hard. Although, even then you will hardly hear the dual-fan setup blowing out of the back. They are very efficient and very quiet.

The keyboard feels nice to the touch and is tactile enough to satisfy the needs of most gamers. It has a red-backlit which is good if you play at night.

One thing that is also worth mentioning is that the sound quality of this laptop is really nice. The Dolby Audio Premium sound feature really lives up to its name and takes the media and web-browsing experience of the Acer Nitro 5 a notch above the competition.

Furthermore, this laptop is Acer’s Windows mixed reality headset compatible, allowing you to play VR games on it. 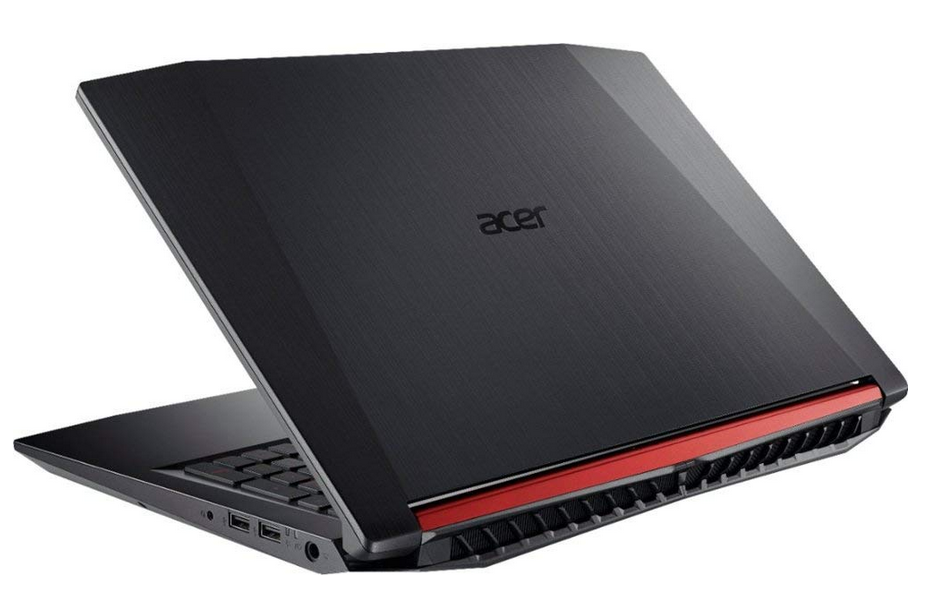 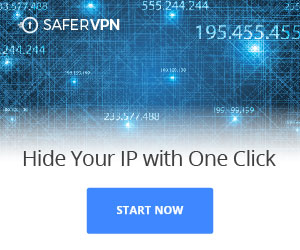 This site is a participant in the Amazon Services LLC Associates Program, an affiliate advertising program designed to provide a means for sites to earn advertising fees by advertising and linking to Amazon.com.